This paper follows Derrida's criticism, in The Voice and the Phenomenon, of Husserl's conception of meaning as ideality and identity. The french author contests the ideality and supratemporality of meaning, its separation from the meaning conferring act, and defends the inclusion of the following indicative dimensions of the last in the former: 1) the sensible element of the linguistic sign (namely in the ideal form of the word, that is in the expression); 2) the manifestation and communication of the experience or act (in the conscience as such); 3) the sensible and empírical content of experience, be it sensational, perceptive, imaginative or potentially and mediatelly intended (in the meaning itself). He questions, moreover, having asserted its temporal condition, which also derives, nevertheless, from some assertions by Husserl, the possibility of constitution of a «strict» and «true» identity, stating that intuitive presence is unable to form both the total covering between the intended and the fulfilling meaning, and the abstract ideality that would be function of the possibility of an infinite repetition, instead of conditioned by a "finite-infinite" one. Finally, he explains better the relation between the sensible face of sign and the ideality of meaning, the former's place and role within the differentiation and repetition process. He notes that it is an 'originary' lack in thinking and meaning itself that claims for the linguistic sign ('supplement of origin'), "in succession" for its ideal form and its sensible oral and written elements, without ever reaching any completion ('supplementarity', 'differe(a)nce'). We also attend the derridean hypothesis of writing as the consummation of the link between ideality and death, the last one being considered as having a special relation to sensibility and difference. 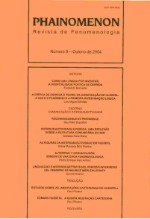