Theologian-philosopher, Júlio Moreira Fragata defended in 1954 his graduation (degree) as a doctor at the Gregorian University, whose thesis entitled The Phenomenology of Husserl asfoundation of the Philosophy. Among this author's varied works, this one is the work which we had set out, given its importance for the phenomenology in Portugal. Besides, our study is aimed to be a pedagogical support and for the least exercised in these subjects, it is a light introduction to the phenomenological thought. Divided in two parts: "Fragatian Presentation of Edmund Husserl's phenomenology" and "Some considerations on the fragatian conception of Edmund Husserl's phenomenology", this text still intends to explain that the true foundation of the philosophy, which for the author is phenomenology, that is, the direct observation of that which shows itself to the conscience through the evidence of the things, in spite of his theological concerns. 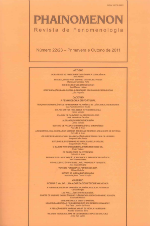