One of the most significant marks of this article is the attempt to establish the idea that a new phenomenological approach is needed for the study consciousness and all it's features. The point is that the old demand for a scientific approach to consciousness shouldn't be, as it has been, incompatible with de need to preserve the essential nature of consciousness. Unfortunately, that's precisely the case in the majority of the proposals related with the study of consciousness. The debate with Fodor is thus quite important, since it brings to light precisely what one must avoid in arder to save every single difficulty related with consciousness, and consciousness itself. A new methodology is therefore needed, one that is capable to observe the demands just acknowledged, but one that is capable to point new directions as well. Husserl , as we have seen, has much to say on the subject, but there is yet much to be done. 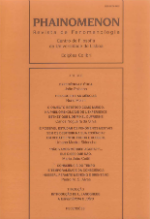