Considering the problem of a supposed hidden psychology as the question which, in practice, shows the true face of Husserlian phenomenology is to put, from the very beginning, the relation between psychology and phenomenology in a misguided way. ln fact, what is to be considered is the decisive influence psychology has in the route systematically followed by the discipline created by E. Husserl, and whether or not such influence can meet its latter transcendental dimension. 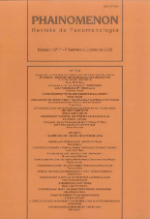