A fenomenologia husserliana do tempo perante a relatividade restrita de A. Einstein

In this paper, I start with the opposition between the husserlian project of a phenomenology of the experience of time, started in 1905, and the mathematical and physical theory of time, as it comes out from the special theory of relativity, by Einstein, in the same year. Although the contrast between the two approaches is apparent, my aim is to show that the original program of Husserl's time theory is the constitution of an objective time and a time of the world, starting from the intuitive giveness of time, i.e., from time as it appears. To show this, I stress the structural similarity between the original question of time, by Husserl, and the problem of a phenomenology of the space constitution, as it was first developed in the husserlian manuscripts of the XIX century, in which we find the threefold question of the origin of our space representation, of the geometrization of intuitive space and the constitution of transcendent world space. Finally, I reconsider some of Husserl's main theses about the phenomenological constitution of objective time in the light of the main results of special relativity time-theory, introducing several corrections to central assumptions that underlie Husserl's theory of time. 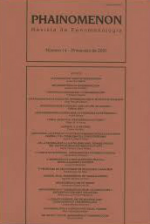